One of my beloved anonymous Zionist readers sent me an LGF (no, this doesn't link to LGF) link to several photos of Arab/Muslim children posing with or around weapons. Apparently, in her/his hasbara-addled mind this constitutes some kind of rebuttal to the photos and commentary I posted in "Making Monsters at Beth Israel".

I'm not sure if this is a case of the 'they-do-it-too' ploy or the 'they're-more-eviler' manuever. In any case, it's a diversionary fallacy, pure and simple--tu quoque. Now, anonymous commenter, if you're reading then please pay attention because you won't learn this from your comrades on LGF (no, this doesn't link there, either, but it's not the quiz again): You can never justify or excuse the wrong that you or others do by pointing out an equal or worse wrong--imagined or real--of someone else.

Any way, below are some more images along the theme of my last two posts, the last being from a Purim celebration. 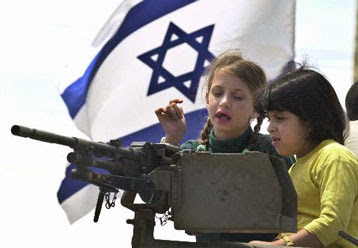 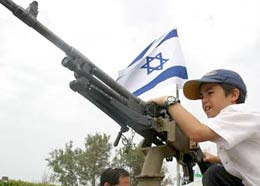 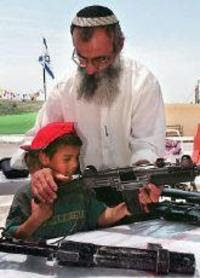 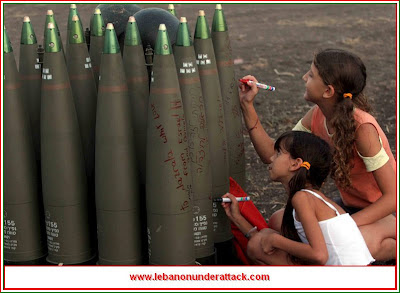 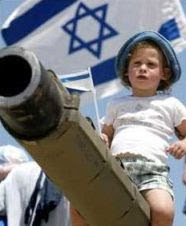 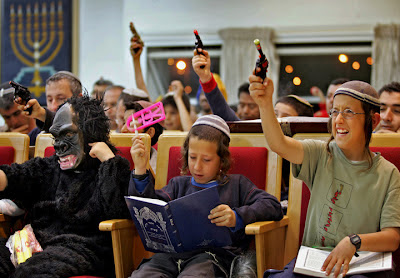 
Comments:
If it wasn't for jewish kids with guns there would be real genoicide in Israel. The only great shame on the Jewish people is that they didn't arm themselves back when ole' Adolf was coming to power. Please read this article below

The chief spokesman of the Russian Air Force, Col. Aleksandr V. Drobyshevsky, has confirmed in writing for the first time that it was Soviet pilots, in the USSR's most-advanced MiG-25 "Foxbat" aircraft, who flew highly-provocative sorties over Israel's nuclear facility at Dimona in May 1967, just prior to the Six Day War.

Gideon Remez and Isabello Ginor, who co-wrote the recent book Foxbats over Dimona, which asserts that the Soviet Union deliberately engineered the war to create the conditions in which Israel's nuclear program could be destroyed, on Thursday described this "extraordinary disclosure" as "official confirmation of the book's exhibit A and the source of its title."

Published in June by Yale University Press, the Israeli duo's book asserted that the Soviets flew sorties over Dimona in the still-experimental and top-secret Foxbats both to bolster a deliberate Soviet effort to encourage Israel to launch a war, and to ensure that the nuclear target could be effectively destroyed once Israel, branded an aggressor for its preemption, came under a planned joint Arab-Soviet counterattack.

Soviet nuclear-missile submarines were said to have been poised off Israel's shore, ready to strike back in case Israel already had a nuclear device and sought to use it. The Soviets were also said to have geared up for a naval landing on Israel's beaches.

The book, hailed by experts such as the former US ambassador to Israel and Egypt Daniel Kurtzer for marshalling a "compelling argument," nonetheless featured what the authors acknowledged was a dearth of incontrovertible documentation that would back up central aspects of their thesis. They noted at the time that it was "entirely possible that few corresponding documents ever existed," that key documents may have been destroyed, and that "the accounts of numerous Soviet participants refer to orders that were transmitted only orally down the chain of command."

However, a delighted Remez and Ginor told the The Jerusalem Post that official confirmation of the Soviet Foxbat sorties had now been published by Drobyshevsky in an article posted on the official Web site of the Russian Defense Ministry. The "extraordinary disclosure of a hitherto secret operation," they noted, "apparently was included inadvertently - in a statement that was published in a completely different context": to mark the anniversary of the test pilots' school from which one of the pilots who participated in the 1967 flights graduated.

The relevant section of Drobyshevsky's article states (in translation): "In 1967, the military valor and high combat training of Col. Bezhevets, A.S. (now a Hero of the Soviet Union, an honorary test pilot of the USSR, [and] retired Air Force major-general), were demonstrated while carrying out combat operation in Egypt, [and] enabled [him] to perform unique reconnaissance flights over the territory of Israel in a MiG-25RB aircraft."

Remez and Ginor said this high-level admission of the Soviet sorties, which was first posted on the ministry's Web site last October, "comes as close to an official document as one can hope for in the foreseeable future, given the prevailing circumstances in Russia."

They noted that it corroborates the personal testimony of Bezhevets's senior colleague, Lt.-Gen. Aleksandr I. Vybornov, who is quoted in the book as having described the missions on several occasions.

The book's findings were first published by the Post on May 16, under the heading "Soviets engineered Six Day War 'to destroy Israel's nuclear program.'"

Remez and Ginor told the Post that this article "was widely reproduced" and "aroused intensive discussion" in the FSU. Several respected news media outlets, notably the Russian daily Komsomolskaya Pravda, they said, "contacted some of the veterans who were among the main sources for the book, and they reiterated their accounts."

Among such veterans confirming their stories was Gen. Vasily Reshetnikov, the commander of the Soviet strategic bombers, said to have been given maps for the planned strike at Dimona.

The "conventional view" of the events leading up to the 1967 war, Remez noted when the book came out, "is that the Soviet Union triggered the conflict via disinformation on Israeli troop movements, but that it didn't intend for a full-scale war to break out and that it then did its best to defuse the war in cooperation with the United States." The book, he said, "totally contradicts everything that has been accepted."

Having received information about Israel's progress toward nuclear arms, the book asserts, the Soviets aimed to draw Israel into a confrontation in which their counterstrike would include a joint Egyptian-Soviet bombing of the reactor at Dimona.

The Soviets' intended central intervention in the war was thwarted, however, by the overwhelming nature of the initial Israeli success, the authors write, as Israel's preemption, far from weakening its international legitimacy and exposing it to devastating counterattack, proved decisive in determining the conflict. Because the Soviet Union's plan thus proved unworkable, the authors go on, its role in stoking the crisis, and its plans to subsequently remake the Middle East to its advantage, have remained overlooked, undervalued or simply unknown to historians assessing the war over the past 40 years.

The Israeli authors' thesis, they told the Post this week, had now won over Komsomolskaya Pravda's Col. Viktor Baranets, a noted military correspondent and former General Staff officer. They quoted him as having written recently that "the time has apparently come to set the record straight. So far, the facts have often been replaced by inventions. No one can dispute the obvious: the USSR 'orchestrated' that war... The USSR was prepared for an invasion of Israel. The confessions of our own officers prove this."

The Russian media also recently contacted Bezhevets himself, the authors said, but even though he has now been officially praised by his own Defense Ministry for making the Foxbat flights over Israel, he denied doing so. According to Remez and Ginor, this "indicates that Drobyshevsky's [Defense Ministry] statement relied not on the pilot's testimony but rather on the air force's own documentation." This, in turn, they said, "illustrates the point... that full and direct documentation of the Soviet role in 1967 is still being suppressed."

Remez, a longtime prominent Israel Radio journalist, fought in the Six Day War as a paratrooper. Ginor was born in the Ukraine, came to Israel in 1967 and is a noted analyst of Soviet and post-Soviet affairs.

I added a DuckDuckGo (DDG) search form to this blog because of privacy concerns with Google. If you're looking for content on this blog and DDG can't find it then you may want to try a StartPage site search.

This work is licensed under a Creative Commons Attribution-ShareAlike 3.0 Unported License.

The main purpose of this blog is to expose Zionists subverting the peace movement, especially in Michigan. 'Progressive Zionism' is to Zionism what 'progressive Nazism' is to Nazism.